Governor and Legislature Disagree on Closing the Budget Shortfall

The economic crisis resulting from the COVID-19 pandemic presents a great challenge as state leaders work to adopt a balanced budget by June 15. According to current estimates, the state faces a $54 billion shortfall against what Governor Newsom had proposed during a robust economy in January.

Last week, the two houses of the Legislature agreed on a collaborative budget approach, which differs substantially from the Governor’s. State leaders are now negotiating a resolution. The Governor has considerable leverage in this process since the Legislature’s proposal would increase spending and, ultimately, he can use the line-item veto to reduce allocations with which he disagrees.

Under the Governor’s proposal, the Proposition 98 guarantee would be reduced over two years by $17.5 billion as compared to the January budget proposal. The Legislature would spend above the Prop 98 minimum guarantee by $8 billion – based on an assumption that $5.3 billion of that higher spending would come from additional federal funds. Thus, the legislative spending level would be about $9.5 billion less than in the Governor’s January budget proposal.

The Governor proposes a $6.5 billion cut to the Local Control Funding Formula (LCFF), which; would be rescinded if federal funds materialize. The Legislature fully funds LCFF, including a cost-of-living-adjustment (COLA). The Legislature also included a trailer bill (i.e. legislation that implements the main budget act) that would require districts to report unspent LCFF supplemental and concentration grant funds (i.e. additional funds received for at-risk students) and spend those on the targeted students [AB 1835 (Weber), which Children Now co-sponsored].

Both plans would defer making payments to Local Education Agencies (LEAs) of $1.9 billion from June 2020 until July 2020 (into the next fiscal year). Then, they would defer $5.3 billion of payments (April, May and June) from 2020-21 until the 2021-22 fiscal year. If additional federal funds are not provided, the Legislature would increase the K-12 deferral from $5.3 billion to $9.8 billion.

The Governor and Legislature have adopted very different mechanisms for allocating nearly $4.4 billion of the Federal Coronavirus Aid, Relief, and Economic Security (CARES) Act Funds. The resulting distribution to districts would differ greatly. The Governor’s proposal promotes equity by limiting the allocation of $2.9 billion of CARES funds to LEAs that have qualified for additional LCFF funding because of their high concentrations (above 55%) of low income, English Learner, and foster youth students. The Legislature, by contrast, proposes to distribute the funds to all districts in proportion to the LCFF formula, including districts’ uniform base grants.

The Governor’s proposal was silent on the issue of flexibility for student attendance, but the Legislature would “hold harmless” districts at their 2020-21 level of average daily attendance (ADA) if the district (1) reports on student engagement and (2) meets certain local Continuity of Learning Plan elements. While the specifics of this language will be important, Children Now – in collaboration with the Parent Teacher Association and its other education equity partners – is advocating for linkage of student attendance flexibility to specific minimum assurances of educational program.

The Legislature continues to fund categoricals (discrete programs that receive restricted funding for a specified purpose) fully at 2019-20 levels. But the Governor would reduce them by $350 million, including these cuts of particular note to STEM advocates:

In January, the Governor proposed to allocate $6 million in federal funds for California Subject Matter Projects (CSMP) in math, science, English language arts and history; his May Revision maintained this funding. The Legislature eliminated this and used the funds elsewhere. Both eliminate January’s proposal of a new CSMP in computer science.

In January, the Governor proposed increasing funding to the University of California ($169 million) and the California State University ($199 million). The Governor’s May Revision eliminates those proposed augmentations and then cuts the two systems by $740 million total. These reductions would be rescinded if the state receives $14 billion in additional federal funds. The Legislature restores January’s augmentations. If federal funds are not provided, $770 million in cuts from January’s new, higher base would be triggered. The Legislature also focuses some cuts on bureaucracy within these two systems.

The Governor proposes a wide range of cuts to the California Community Colleges (CCC). The Legislature rejects many of those cuts, including those to enrollment growth and COLA ($200 million combined), Student Equity & Achievement, adult education, part-time faculty, and more. The Legislature also shifts other CCC funding to reduce cuts to apportionments proposed by the Governor; and it authorizes deferrals of an additional $674 million if the necessary federal funds are not provided.

The Governor proposed cuts to many financial aid programs, including the Golden State Teacher Program and the college savings program; and he would reduce Cal Grant support for students attending non-profit institutions. The Legislature rejects virtually all of those proposed reductions in financial aid.

The Exploratorium loses $3.5 million that had been proposed in the January budget and the Governor’s May Revision eliminated his January proposals to expand funding by $27.5 million for two medical schools, at UC Riverside and at UCSF/UC Merced’s Fresno Partnership Branch. The Legislature restores those augmentations. The Governor’s January budget proposed a $1.3 million augmentation for a Subject Matter Project in computer science; that allocation has been removed from both proposals.

The California STEM Network is pleased to announce we will be offering a series of webinars starting in July. Our first webinar, Building Agile Systems to Scale TK-12 STEAM Efforts, will take place on Wednesday, July 15, 10:30 – 11:45 am PT and will highlight the San Diego Unified School District’s Elementary STEAM Pilot Program. This presentation had originally been planned to take place during our 2020 Statewide Convening that had been scheduled for March, then May, and was ultimately canceled. This program, which is now in 48 (almost half) of the district’s elementary schools, has made a significant impact on teaching and learning. Our presenters, Cheryl Hibbeln and Michael Goodbody, will share with us how partnerships and relationships built during the program’s development have proved to be critical to help the district navigate the unique challenges posed by the shelter-in-place orders. We hope you join us and learn how teachers and students who are participating in the program were better prepared to make the shift to distance learning and about the curriculum that has been developed to support the integration of STEAM into the school day.

Cheryl Hibbeln is currently President of IlluminatED Collective. She is the former Executive Director of School Innovation in San Diego Unified and has over twenty years of experience developing powerful relationships between education, business, and nonprofit partners in the service of meaningful and equitable graduation outcomes for all.

Registration for the webinar is available online. Please register today! 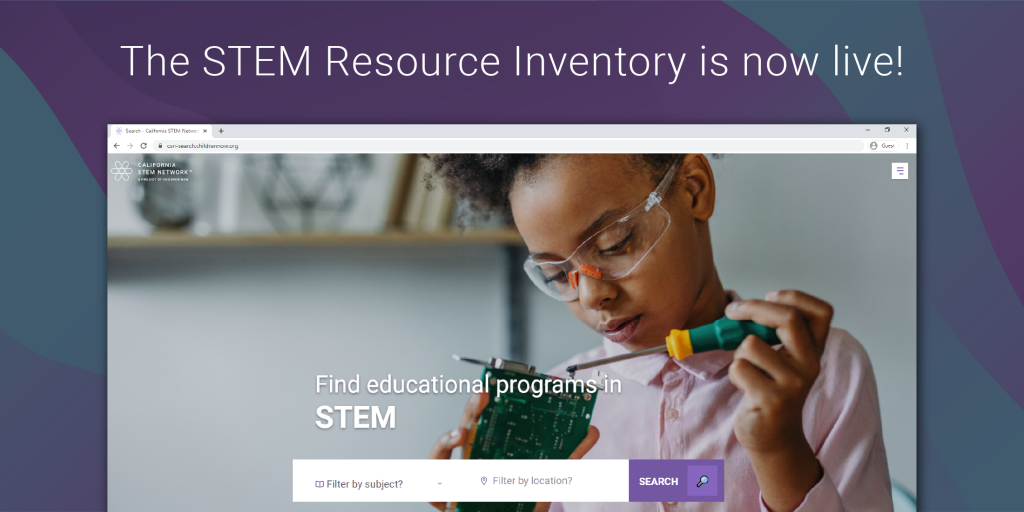 This month, the California STEM Network soft-launched our new STEM Resource Inventory. This online search tool includes information about STEM programs and providers offered in the San Francisco Bay Area. More than 18 months in the making, the inventory includes mostly programs offered by non-profits and community-based organizations in San Mateo and Santa Clara Counties. These two counties were the first ones selected for inventory as a part of the project. The relatively recent plans to expand the inventory to the nine county Bay Area and to include programs offered by the many districts, county offices of education, and schools in the area was disrupted by the global pandemic. Also, the original plans were to include and highlight those programs which offered in-person experiences. Given the new reality we find ourselves in, we have added the opportunity for providers to add virtual and blended programs to the inventory.

On May 21, the UC Board of Regents unanimously approved the suspension of the standardized test requirement (ACT/SAT) for all California freshman applicants until fall 2024. The suspension will allow the University to create a new test that better aligns with the content it expects students to have mastered for college readiness. However, if a new test does not meet specified criteria in time for fall 2025 admission, UC will eliminate the standardized testing requirement for California students.

The following outlines the Regents’ actions:

Test-optional for fall 2021 and fall 2022: Campuses will have the option to use ACT/SAT test scores in selection consideration if applicants choose to submit them, and will develop appropriate policies and procedures to implement the Board’s decision.
Test-blind for fall 2023 and fall 2024: Campuses will not consider test scores for California public and independent high school applicants in admissions selection, a practice known as “test-blind” admissions. Test scores could still be considered for other purposes such as course placement, certain scholarships and eligibility for the statewide admissions guarantee.

New standardized test: Starting in summer 2020 and ending by January 2021, UC will undertake a process to identify or create a new test that aligns with the content UC expects students to have mastered to demonstrate college readiness for California freshmen.

Elimination of writing test: The University will eliminate altogether the SAT Essay/ACT Writing Test as a requirement for UC undergraduate admissions, and these scores will not be used at all effective for fall 2021 admissions.

In addition, UC President Janet Napolitano has asked the Academic Senate to work with University administration to determine the appropriate approach for out-of-state and international students beginning in 2025. While nonresident students are expected to complete comparable coursework, their high school courses are not pre-approved by UC in the same way as California high school courses. Assessing nonresident students without a standardized test presents challenges in terms of fairness and practicality. Several possible options for nonresidents that may be considered include extending the new content-based test required of California students to out-of-state applicants as well, or requiring scores from the ACT, SAT or other approved standardized test(s).

In the coming months, it is expected that President Napolitano will request that the Academic Senate further review UC’s current admissions guarantees, including the statewide eligibility pathway and Eligibility in the Local Context (ELC), which offers an admissions guarantee to the top students in California high schools. Students meeting the statewide index or designated as ELC who are not admitted to any of the UC campuses to which they apply are offered a spot at another UC campus if space is available. The president will also ask the Academic Senate to conduct additional analysis and a review of factors relating to representation of California’s diverse high school student population, including A-G course access, student outreach, recruitment and support services.

The California STEAM Symposium will be a virtual event this year, held December 11 – 13. The CDE Foundation, one of the hosts of the STEAM Symposium is now accepting proposals for online presentations. Proposals are being accepted through June 17. The CDE Foundation offers webinars on how to submit a proposal and will be providing training sessions prior to the Symposium for all presenters on how to present in a virtual environment. For more information visit https://cdefoundation.org/cde_programs/steam/.

This year’s Early Math Symposium will focus on fun, creativity, and discovery while supporting the mathematical development of all young children! The event takes place on Friday, June 26. Register today at: https://2020earlymathcalifornia.eventbrite.com