On starting out as a student organizer

I’m a very curious person, and going into college, I really wanted to learn about the world, have conversations with interesting people, and understand everything that was going on around me. During my time at UCLA, which has a long history of student organizing and civil rights activism, there was a lot happening on campus – specifically related to Proposition 209 (affirmative action) and changes in admissions policies. So I got involved.

I educated students, organized protests, engaged in forms of civil disobedience, but I also participated in student government. There’s a long legacy of student organizers who used both the election process and student government office as a platform to educate and engage students about important issues impacting their own lives and the community around them – and most importantly – make sure they knew they were able to get involved and do something about those issues. I ran for and was elected to office twice, first as the External Vice President and then as President. I participated in both statewide and national student organizations – which exposed me to federal policy issues as well as lobbying.

After graduation, I moved to Washington, D.C. and split my time working for two organizations: the United States Student Association (which focused on advocacy on behalf of students across the country) and Choice USA (which was started by Gloria Steinem to develop the next generation of women leaders focused on reproductive health). It was such a wonderful, yet intense, experience.

I knew that the on-the-ground work, while it taught me a lot, wasn’t something I wanted to do in the long-term, and so a year later, I came back to California. I was interested in learning new things and developing other skills – so I moved into the non-profit sector.

On working at Children Now

When I started at Children Now in 2001, I was hired as a development assistant, which excited me, since working in non-profit means you should know how to fundraise. The job was also, initially, a really good way to recalibrate after the intensive work I was doing in college and in D.C.

Within a month, however, the senior development associate left, and I ended up taking on more responsibility. Eventually, I was pretty much on my own in the department.

I spent 10 years working at Children Now (the first time!) and much of that was in development. There were some leadership changes during my first few years, and when Ted (Lempert, current Children Now president) came on board, I had the opportunity to work with him and other senior management on clarifying what kind of vision we had for the organization moving forward and how that would impact our strategy.

I learned a lot about myself during that time. I became a mother (to two daughters), and it really helped me understand the challenges that parents face, and the privileges that I had – which only deepened my commitment to this work – knowing that the majority of CA kids and families don’t have the supports that they need.

I also started a graduate program (and later earned an Executive MBA) – where I spent time thinking about my interests and strengths.

On knowing your strengths and finding what makes you happy

Unlike my colleagues, I’m more of a generalist, and sometimes when you’re interested in a lot of things, it’s hard to figure out what you want to spend your time on. There were times when I knew that I wasn’t happy with the work I was given, but I had no idea that I could express that and ask for changes (not ironic at all given my activism). I was raised with the mentality that you worked hard and did what was asked of you; enjoying the work wasn’t necessarily a part of the equation.

When I came back to Children Now, I was given the flexibility to fill several different roles, which is where I’m happiest and do my best work. So now I work across various projects including research and early childhood strategy development, framing/communicating why our work is important and projects with our HR team.
In short, I wear a lot of hats, and wouldn’t have it any other way.

One of my roles, which I find deeply rewarding, is to spend time focused on our staff, finding out how we can better support them, because everyone needs support, even and sometimes especially, super stars. I really appreciate that our leadership team understands that and puts resources towards making it happen, it’s part of the reason why we have so many staff people who have worked at Children Now for 10+ years.

On what we need in California

On the early childhood team, we are asking big picture questions: how can we take this moment in time, when we have a Governor who has expressed his interest in prioritizing young kids and doing right by them and make meaningful impacts on a deeper level?

Doing nothing or more of the same means we have a growing crisis, especially when the majority of our state’s children are low-income, kids of color, from immigrant families and/or dual language learners. Yet the research tells us that investing in early childhood works – it can eliminate the gaps in achievement and opportunity that show up before a child enters a kindergarten classroom. If California is going to make a meaningful change in how it invests in children, we know the window of opportunity is now. The question is, will we make the changes that we know are needed or will we squander it?

Stacy joined the organization in 2016, her second tenure at Children Now. She also worked for the organization from 2001 to 2011. Ms. Lee was Director of the Office of Strategic Planning and Integration at First 5 LA, where she was responsible for managing cross functional teams to execute projects critical to implementation of the agency’s new strategic plan and engage the Commission on the status of plan implementation. First 5 LA is a publicly funded entity focused on improving the lives of children 0-5 in Los Angeles County with a $200 million annual budget. She also served as the Policy Manager at First 5 LA and was responsible for managing an $18 million portfolio of grants focused on early childhood policy and advocacy; oversaw state lobbying efforts; led the agency’s policy strategy development focused on early education and home visiting advocacy; and developed partnerships and coalitions with funders and advocates at the local, state and federal levels.

Ms. Lee holds a BA in Geography with a focus on Urban and Regional Development and a minor in Asian American Studies from UCLA. She also holds an Executive MBA from the Drucker School of Management at Claremont Graduate University. 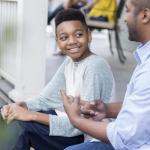